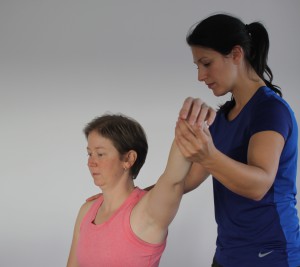 I was lucky. From the age of about 14 I knew what I wanted to be when I grew up. A physiotherapist. According to my sixth form leaving book the physiotherapist for the England Rugby Union team! Through a lo

t of hard work, sweat and occasional tears both at school and university I realised my dream and became a physiotherapist at the age of 21 in 2003. I have been working as a physiotherapist ever since and remain lucky as I am one of the few people around who can say they truly love (politics and nonsense aside) their job. I am by nature quite a “touchy feely, hands on” person, who enjoys helping people. I also find the human body fascinating and enjoy maintaining my own fitness (so understand its importance), so this job is just perfect for me. As a physiotherapist you can really have an impact on people’s well-being and quality of life. Whether it is the athlete who is desperate to get back to their sport after an injury or the little, frail elderly lady who needs rehab because she can’t answer the door as she can no longer get out of her chair and fears falling over every time she gets up, physiotherapy can have such a positive impact on people’s lives.

This is why for me giving up my full time physiotherapy job in the UK to move to Amsterdam with my husband, to live as an expat has been some of the most exciting but equally frustrating (and maybe a little scary) times of my life. It has been, on occasion so overwhelming for me regarding getting a job here in Amsterdam as a physiotherapist. To begin

with I just did not know where to start. But I took a deep breath and start I did. Due to the fact that our move occurred pretty quickly it did not give me any time pre move to apply for the appropriate legalities to work in the Netherlands as a physio or even to begin to conquer the language. So I jumped in with both feet and immediately began both these huge tasks upon arrival. I ploughed through the legal forms and worked hard on learning Dutch. Then it was a case of waiting, and waiting and then waiting some more for the legal side to give me a ja or nee to work here (as a physio). It was worth the wait, I got my yes! As you can imagine, desperate to “get my hands on people” the waiting was not easy. On the plus it shows that the Dutch government takes the position of quality of care seriously and doesn’t just give out registrations to work here as a physio willy nilly.

So I got my yes, the next big question was how was I going to go about being a physio in Amsterdam? I had to ask myself where could I add the most value? I came to the conclusion that it would be giving physio treatment to expats in Amsterdam, and so my answer came in the form of my own physiotherapy business PhysioMatters. I am in the position where I can have an impact on a group of people in Amsterdam that perhaps at times struggle with language barriers. I am excited about working here, developing PhysioMatters and seeing where the role takes me.